Marge Monko and Marko Mäetamm are participating in the exhibition ‘Summer of Love’, curated by Katerina Gregos. The exhibition is taking place at the Pythagorion Art Center on the Greek island of Sámos in the eastern Aegean Sea. It explores the meeting points between politics and love by juxtaposing the sociopolitical atmospheres of 1967 and 2017, and drawing parallels between them. For this exhibition, Marko Mäetamm has created a new painting series ‘Summer of War’, consisting of posters from 2017 presented through the aesthetics of the 1960s. The wallpaper installation by Marge Monko examines, through photographs and diagrams, the impact of birth control on the sexual liberation of women and the ‘free love’ movement.

Katerina Gregos is curating an exhibition at the Tallinn Art Hall, opening in February 2018.

Marko Mäetamm ‘Self-Portrait in the Cage’, 2015. Courtesy of the artist and Temnikova & Kasela Gallery

Marko Mäetamm will be presenting his solo exhibition ‘I’m only streaming’ at kim? Contemporary Art Centre in Riga. Mäetamm’s first solo show in Latvia combines a selection of recent works addressing social issues with domesticity-related works that were on view at the exhibition ‘Home and Away. Raymond Pettibon: Living the American Dream. Marko Mäetamm: Feel at Home’ at Kumu Art Museum in 2015.

Laura Põld ‘Much Later We Go For A Swim’, 2017, installation detail. Courtesy of the artist. Photo credit: Rachel Schenberg

Laura Põld’s installation ‘Much Later We Go For a Swim’ is part of the group show ‘Intra-Structures – Monster of the Seven Lakes’ curated by Jussi Koitela at Treignac Projet in France. The entire exhibition and Põld’s installation are inspired by the later life and writings of Tove Jansson: her autobiographical novels for adults and searches in painting. 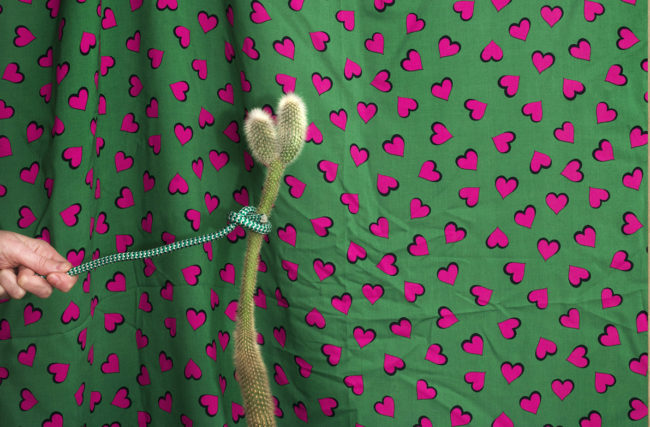 Sigrid Viir is participating in the international group show ‘Wild Flowers (wildness is contextual!)’, on view at the Gallery Narrative Projects in London. The exhibition brings together 18 international artists all subversively examining the motif of flowers. Curator Carlos Noronha Feio explores how artists from different generations approach the motif of the flower as a mostly naive symbol, and how the aesthetic quality of the flower motif transforms within the contextual framework of each individual practice. Sigrid Viir will be exhibiting her work ‘Sweet smiles and golf clubs (cactus)’ (2016).

Marge Monko is taking part in the group exhibition ‘After the Fact. Propaganda in the 21st Century’, curated by Stephanie Weber at the Lenbachhaus in Munich. The aim of the curator is to show propaganda as both problem and opportunity for artistic and political discourse – ‘After the Fact’ looks at the concept of propaganda in order to broaden its definition in light of the societal, political and technological developments of the 21st century. Artworks gathered in the exhibition engage in various ways with the symptomatic phenomena of the digital age. Marge Monko is exhibiting her video ‘Forum’ (2009).