SL: You spent a lot of time with Katja’s art while making this film. How has your attitude towards it changed over the course of this project?

PK: At the beginning of the project my focus was much more on the sources [of Katja’s work], on the contemporary flow of information and visuals, which she is inspired by, and how she operates with it. I tried to translate this into film and that, for example, initiated the use of the green screens. I asked myself how I could through montage express the experience of open tabs of online thought processes or movement between hyperlinks. I became interested in the dynamic between the experience of skipping from image to image in time or virtual space and the linear language of film.

But the focus of the film shifted over time. As I was filming I spent time, physically, with Katja’s installations and so the bodily experience of it became much more important. It was something I was previously interested in as well but I never planned to have this as the main theme. It grew out of the experience of making the film.

SL: Art films are often portraits of artists, while art and the physical spaces it inhabits, like galleries, public spaces, and artists’ studios, seem to be left on the sidelines. Then experts are invited to talk about art, interviews are made and the film becomes more about “specialists” explaining how to look at art. Did you ever feel the film taking that direction at some point and did you consider an approach like that at all?

PK: We did do interviews – with curators, Katja’s gallerists, but… there are a few things I’d like to point out. First of all, in film as a medium it can be a challenge to keep an open space where no one element dominates others. I often feel when certain explanations appear in documentaries the space for experiences is diminished. Of course it is possible to work in different ways with these elements. An interview can also be an experience, for example. But with this film I decided not to highlight interpretations and reflections that much. I wanted artworks and the specific way we had recorded them to have their own space and the audience to experience that.

SL: I could say the film demands a lot from the audience. Like the introduction says – the average time a person spends with an artwork is 17 seconds. This film, however, offers 45 minutes of intense proximity.

PK: Being demanding of the audience is a balancing act. I don’t want to make a film that puts the viewer in a position of constantly struggling just to understand it. It’s like making a film while simultaneously sealing it off from its audience. But I also don’t want to make a film that would be predictable in terms of expectations towards the medium. Among other things I’m interested in slow cinema. To me it’s not about being slow just for the sake of it, but I want to question what it means to play with duration in that context. Time is one of the most significant means of expression in film. I am very interested in the rhythms and dynamics that are produced when we avoid quick cuts and give duration to something on screen and then cut into it with great precision.

SL: There’s something I think all great art does – on the one hand, it takes time and on the other hand, gives it to the viewer and suspends them in a particular time and space where something extraordinary is happening. And often a very personal, yet shared experience emerges.

PK: Yes, it is a proposition – wait, stay with it a little longer. Maybe I’m making a bit of an unfair generalisation here, saying we plough through visuals with an immense speed all the time, but I really felt I had the possibility to invite people to Katja’s art, using different means. To have them experience through my camera lens and sound what happens when you resist the urge to move on and stay still for another moment instead. That is fascinating to me.

For example, the film ‘Manakamana’ by Stephanie Spray and Pacho Velez that shows people sitting in a small cable car during the extent of the whole ride, no cuts. Or the narrative films of Tsai Ming-liang with their highly composed frames, where he takes time to highlight environments or movements or the silent, yet tense atmosphere surrounding people. These spaces, environments or movements could be presented in a shorter manner, but long takes have something different in them. I’m not saying ‘Look a Little More’ is only relying on long takes but I, too, wanted to find different perspectives by creating new juxtapositions and sequences between environments and Katja’s work. Experience it a little longer and then this way and then a little bit that way – what happens? This is what I did during the project and what I now offer to the viewer.

SL: Besides the visuals you’ve arranged into rhythms, sound also plays a significant role in the film.

PK: Yes, together with the sound designer Dmitry Natalevich we thought about that a lot. Being interested in duration and time means being interested in rhythm. For me sound often prompted certain cuts in montage. One part of the film was edited in a way that while I created the larger structure, Dima composed the sequence of sounds and I finally decided on the specific cuts based on the sound composition. I enjoyed working like that, as while editing I view sound and image as something intertwined, not as separate elements.

Many of Katja’s installations include sonic elements, she creates whole environments, but rhythms in the soundscapes of cities also became important to me. Decisions about sound were extremely specific because the way sound creates space is vital to me.

SL: Where is the material filmed?

PK: It was a conscious decision not to name the locations. It was mostly because I didn’t want it to be about providing information or documenting the process, the geographic location of the experience is not that important – they can entwine or merge. I would rather have the distinction become apparent through the fact that one part of the film takes place in a public park setting, for example, the exact location is not that relevant. But I can list the locations here: we filmed in the City Hall Park in New York, in Shanghai at Katja’s solo show, in Hamburg Art Hall at another of her solo shows, we also have material from her studio in Berlin, Estonian Pavilion at the Venice Biennale and the group show “Ocean of Images: New Photography 2015” in MoMA.

SL: Your background is in film and anthropology. Did the latter have an influence on the film in any way? Are those two somehow linked in your work as an artist?

PK: Well, I don’t follow specific conventions of visual anthropology. But I can’t exactly deny that my background in anthropology still had some effect. Maybe the fact that I don’t necessarily seek out sensational or shocking events with my camera indirectly indicates that. Anthropology has taught me to pay more attention to little things that may seem ordinary at first, to that which is non-sensational. Although Katja is an extraordinary artist, so in that sense she is a sensation. But creating a moment and being in it, learning to be patient in order to experience something – that is very much coming from anthropology or fieldwork. I think that has shaped how I experience other people’s work, which then obviously influenced how I perceived Katja’s work and how I translated it into film.

Also interest in themes Katja works with – information processing, biological processes, technological processes, shifts and concentration in our attention span, what all that means in contemporary visual culture etc. – all these themes relate to anthropology, being human and how that changes. This could turn into another project, a film that goes deeper into reflecting on all of these issues. This time I chose to work with observation and experience. Nevertheless these themes are present.

SL: In a way, through your film Katja’s art touched me on a more intimate level than it had when I was visiting her exhibitions. I have experienced her work through different mediums and it is interesting to think about the similarities and differences in those experiences. There are six episodes in the film and each episode has its own character, displaying her art from a particular angle, whereas the film as a whole opens up different perspectives but none of them dominates others. That is refreshing, there seems to be no one designated point of view for looking at art. That also reminds us that art can be looked at in very different ways and have a different impact. It is not only about the meaning, background, who the artist is and what they’ve gone through. There are many blurry dimensions that are hard to verbalise.

PK: It is interesting to get different reactions. After the premiere someone said that in the episode where Katja talks more, the whole point of the film is revealed. It’s a compelling way to read the film, although I never saw it like that, and I think you didn’t either. Yet in this comment the plurality of ways of looking becomes evident – and one of those ways is thinking about art through the artist’s attitudes. And the specific positioning of this episode in the film as a whole is connected to what I said earlier about how an informative and explanatory tone may have an effect on other spaces and energies and other possibilities to experience something. When it comes to documentaries, to a certain extent we are used to having processes or interpretations explained to us…

PK: Or facts. And then that becomes the underpinning for the entire field of meaning. This film has asked from the start – if it is not the artist-creator that is in the centre of it but rather the artwork, what form might it take in order to remain communicable through film. It was certainly a challenge; I couldn’t find many other examples like that. Of course, there have been countless films made that feature artists’ work. This might be a bit too farfetched connection, but I love Jem Cohen’s work. He as a filmmaker has great respect for music and has made numerous films about musicians. He never puts music in the background – like, let’s have something play as an example for a couple of seconds and then invite musicians to comment on it. When the film is about musicians and their music, music really has to be in the centre of it all, it has to be the main element. I was trying to follow a similar principle. 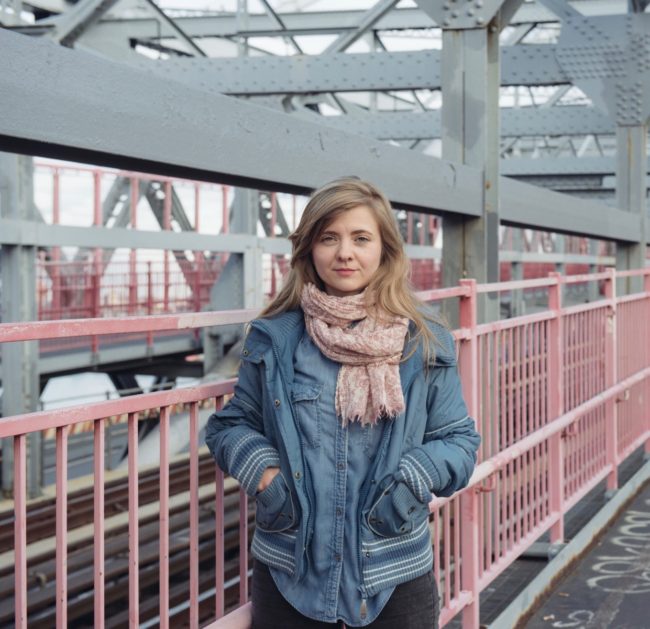