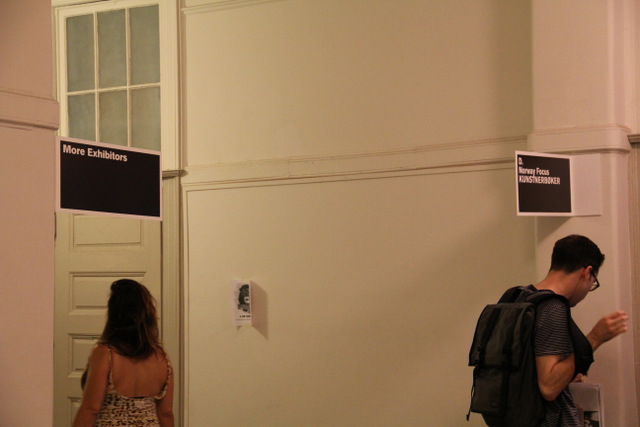 From September 26 to 28 Printed Matter, Inc held the ninth annual NY Art Book Fair at MoMA PS1 in Long Island City, Queens. Printed Matter is an independent bookstore and arts space that was founded in 1976 by a group of radical artists and art critics. The organizers believe that Printed Matter is a mini version of the fair and vice versa. They stand for the alternative in publishing and arts by promoting independent presses, booksellers, publishers and artists with the exposition platform. After the fair I talked with the curator Shannon Michael Cane about the organization of the event and more about the books with Max Schumann, the Executive Director of Printed Matter, Inc.

How do you find and approach the publishers?

Shannon Michael Cane: We have an application process. This year we had 362 exhibitors and over 800 applications. Big part of our job is to sit down and figure out, who can come, and why should they come to the fair.

Why should they come?

For all sorts of different reasons. I can’t give you the secrets because you could take my job away from me. The book fair is an extension of what we do at the store (Printed Matter). It is the same as to why the books get into the store. We look at the book and ask, is this book an artist book? What does it bring to the world of publishing? Do we feel that this is a good example of independent publishing? Would we sell it? Is it interesting art?

Has the fair become more international in the past few years?

Yeah, every year there are more exhibitors. This was our ninth year. We are trying to keep a lot of our old existing exhibitors but also try to squeeze in some new people. We travel around, got to other fairs and find new exhibitors. This year I invited couple of people I follow on Instagram. It is about keeping a balance between new and old people.

Yes, we have done two fairs there now. We just opened applications for the fair in 2015.

Why do you do it — have a book fair over here and over there?

Because America is a really big country. California is very close to Mexico City, and we can get more publishers from Mexico City and South America. Also, a lot of the publishers and artists don’t have money. It is easier for people from New Zealand or Asia to come to California than to New York. There is a booming art and publishing scene in LA. 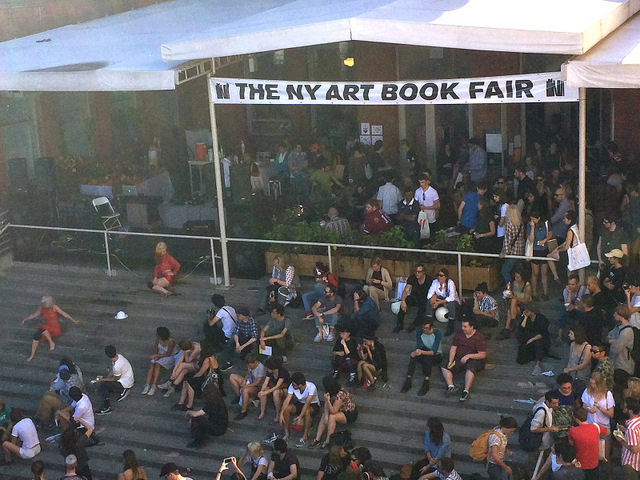 Why MoMA PS1? Why the space? Isn’t it too small for the fair?

We have looked at bigger spaces. Personally, PS1 is one of my favorite museum spaces in New York City. Also, I like the fact that it is a kind of a bastard child of MoMA. It is an old school building on Long Island City.

This year it felt that the fair was a little cramped. However, we are not-for-profit free event. We are not about to take it to the Javits Center and turn it into “sponsored by Google.” For the moment PS1 is where we stay. At LA we have more space but this is because it is California. This is the difference between east coast and west coast.

How do you divide the spaces between different publishers?

The “zine booth” outside is the cheapest, $150. That is one of the most requested booths. It is kids who want to have a “zine table.” The next level is people who are running presses, which fall between “zines” and proper publishers. The main building is made up of artist book publishers. This year we had a Norwegian focus room. Downstairs we had antiquarian, photography sections; on the top floor is what we call young publishers. We also get galleries, who are applying for the spaces because they publish catalogues and artist books.

Did you also curate the program around the fair?

We have a conference program, which is organized by librarians from CABC Committee. It is lectures and talks, and aimed at educating people about artist books. On top of it is the MoMA librarian David Senior. 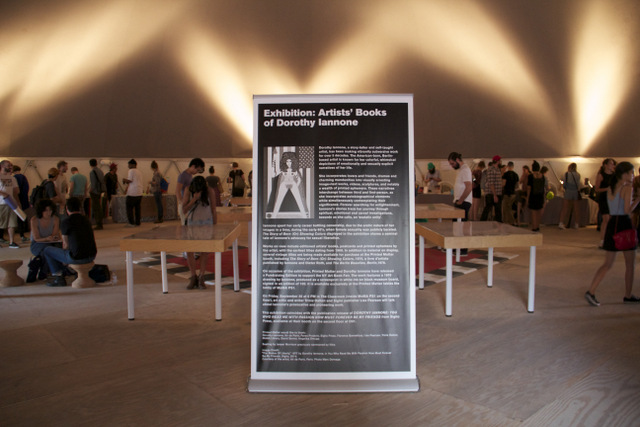 How did the Dorothy Iannone exhibit come about?

Jordan (coordinator of the fair) is a really big fan, and by chance he saw an exhibition with her books. We hadn’t realized that Dorothy had such a history of artist book making. Dorothy was around in the 70s when a more conceptual artist book was happening. Now everyone is focused on her drawings and paintings but there is a whole section of her work that hasn’t been displayed.

Were there more exhibitions than usual?

Every year we get people pitching to us, saying that they have this body of work, and want to show. But there is also another aspect. For example, small press called Boo-Hooray on Canal Street can do an exhibition at their space, and it can be up for a month but not everyone knows Boo-Hooray. When Boo-Hooray has an exhibit at NY Art Book Fair for three days, they are exposed to 36,000 people. At the book fair you can spend three days and see seven exhibitions, four lectures, 362 exhibitors from 28 countries all at one place.

A week later on October 11 I talked with Max Schumann, the Executive Director of Printed Matter, Inc. 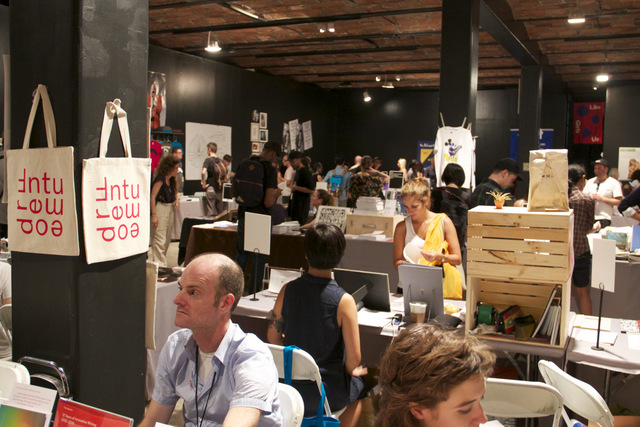 What is an artist book, art book and what is the difference between the two?

The former director of MoMA Library Clive Phillpot developed the MoMA Collection of Artist Books, which is the biggest collection in the world. Phillpot was real champion of the inexpensive experimental artist book. Recently a book of his essays “Booktrek” was published. It is an anthology with his writings and speeches. Phillpot tackles this idea, trying to define the phenomenon. He goes about dozen of different terms. He has artist book, book as art, bookwork, artist bookwork, and book arts etc.

In the late 1960s and 1970s artists challenged, critiqued, and intervened the conventional forms of art. They were interested in the book medium, in its capabilities and possibilities. The book as a multiple is very important. The book can be reproduced again and again and again. Before book arts were in limited editions and became fetishized because of their singularity, whereas for then contemporary artists it was important that the book could be made in large editions.

If you make thousand copies you may have an audience of thousand people. The book is also a singular, a personal experience. It is interesting for artists to have this two-sided thing about it. It is also part of this avantgardian trajectory of taking art off of its holy pedestal and bringing it back into the everyday life. Artists were working with the book as a means of information and communication against the aesthetic object to gaze at.

Are artist books still political like in the 60s and 70s?

It is kind of interesting how apolitical so much of it is. I think it is also due to the way how the educational institution works, and how art as a specialization and a critical discourse became really caught up in its self-referencing, and failed to look outside. The market crash in 2007 caught all the stupid cultural critics and artists by surprise because they forgot about class struggle and class politics. We are all involved with deconstruction and super theoretical identity critiques, and marginalize class. I hope that the fact that students owe huge corporate banks billions of dollars make people more political. 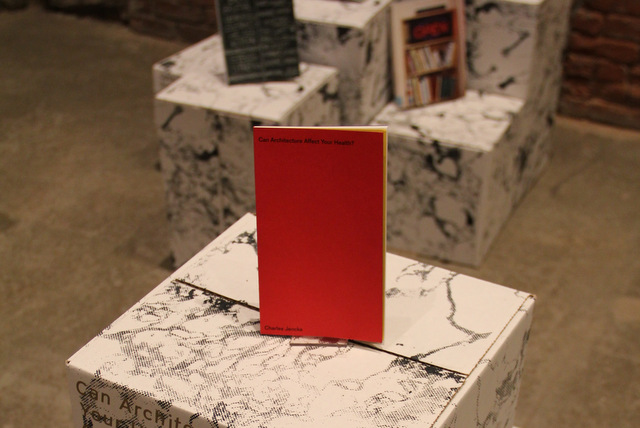 What is a design book?

A lot of people approach the field with a design book, which reminds the artist book.

Yes, there is an interesting crossover and a problem.

In those 60s and 70s the artist became a real economic producer. There are the raw materials, the industrial process of printing the book, and the value — the book is based on real economic relationships. The artist became the conceptualizer of the artwork but also a manager and designer.

If you look at the early books of Lawrence Weiner and Sol LeWitt, you see the strong design sensibility. The artist of an artist book wears all of these different hats. But there are also designers like Bruce Mau, who was popular in the 80s and early 90s. Mau did the designs for all the critical anthologies and trendy art discourse books. He was the one who really turned the design elements into a creative aspect of the books.

Where do the best and most interesting books come from?

Some of the most interesting books come from Germany and Switzerland. It is not just people doing zines on a lark but people who really try to make the artist book thing work and economically sustainable. Good ones are for example KesselsKramer, Rollo Press or Erik van der Weijde.

There is also stuff coming out of LA and New York, and then there are regions that we even don’t know about. We had Lugemik, who did their second year at the fair here in New York. We met Lugemik when we participated at a symposium in Finland a couple of years ago.

Why did you choose the Norwegian focus this year?

I guess it was by opportunity. I was invited to do a talk and a workshop in Bergen at the Hordaland Art Center. The Bergen Art Book Fair just started in Norway and there is a lot of interest in publishing. 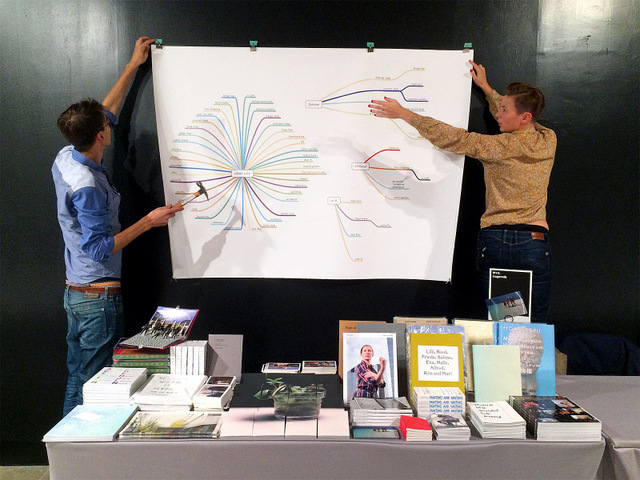 Will there be a Baltic focus?

We should. There are a lot of interesting publications coming out of Central and Eastern Europe. There are interdisciplinary books coming out from Croatia and Slovenia. During the presentation in Helsinki I met Lugemik. What was his name?

Anu wasn’t here this year but Indrek was. They are also very design based. Some we wouldn’t take because it is primarily design, but they work in an interdisciplinary way, where they turn the design project into collaboration with the artist. They do really great work.