The cultural landscape in Tallinn is shaking off its Soviet past in favour of an optimistic internationalism.

I arrived in Tallinn completely disoriented. I had done my research. I knew that Estonia had once been part of the Soviet Union by means of a forced and illegal occupation in 1941, and regained independence in 1991 with the collapse of the Soviet Union, but I was surprised to see just how evident that Soviet past is still. Large, abandoned factories scatter its capital city and Soviet-era housing complexes dot the skyline in every direction. Though Estonia’s history is palpable, there are signs that the contemporary art community is attempting to shape a new and different future.
I was invited to Tallinn by the Estonian Contemporary Art Development Center (ECADC), a migrant office facilitating dialogue within the contemporary art ecosystem in Estonia by instigating conversation with outside voices.  My aim was to visit artists’ studios and meet with the director of institutions, with the goal of listening to as many voices as possible. In the end I visited more than 20 studios, and spoke with people at almost every one of the four major contemporary art institutions in the city.

One such space is The Contemporary Art Museum of Estonia, or EKKM. Founded in 2006, the institution has an extraordinary history of self-organization and experimentation. Housed in the offices of Tallinn’s former Soviet-era heating plant, the building was eventually gifted to the founders and formalized into a legitimate not-for-profit after the founders squatted the building for more than a year. During that time, and since, EKKM has been a space for a younger generation of artists and curators, and continues to expand its programme. The establishment of the Köler Prize in 2011 by EKKM has resulted in an annual exhibition whereby an international jury nominates five artists living and working in Estonia based on their past three-years of work. The opening of an expanded coffee shop, a small bar and a stage in the outdoor courtyard space behind the institution now offers a gathering point for local artists. The building, however, retains much of its original rawness and its DIY feel, as does the institution’s evolving initiative overall.

In 2013, Lugemik, a bookstore and independent publisher, opened its doors in a small garage space on EKKM’s site. Dedicated to the publishing and proliferation of art and artists books, Lugemik is an ambitious and forward-thinking endeavour. With very few other places in the city selling artists’ books and art magazines, the four founding members set out to fill a niche and so far they have succeeded. Lugemik’s publishing arm offers a space for experimental in print form for artists to play with. From exhibition catalogues to print-based projects, the range of their publications is laudable. And so too is their tenacity and drive, with few organizations in the city using limited resources as creatively.
Resources – the lack of monetary support and a limited collector base – was a ubiquitous topic of conversation. Tallinn does not want for space, however, and a number of the many abandoned Soviet-era factories could be converted into interested project spaces. This, perhaps, is one of the most obvious areas of opportunity for a forward-thinking, young artistic community. Rather than becoming complacent and reliant on institutional support, some of the most interesting projects and experimental endeavours in the city have been born with little financial support.
Someone who is actively changing the art scene on a commercial level is Olga Temnikova, co-founder and director of commercial gallery Temnikova & Kasela. Temnikova’s energy, dedication, and critical eye is setting a new standard for contemporary art in Tallinn and recently the gallery was awarded an innovation and creativity award from the Federation of European Art Galleries Association. Temnikova & Kasela represents established and emerging artists from Estonia as well as introducing artists of international renown into their programme on a regular basis.

Taaniel Raudsepp, director of the Tallinn Art Hall, which also includes the Art Hall Gallery and the Tallinn City Gallery, has restructured the institution to participate in a more global dialogue by hosting curated exhibitions by international artists. Founded in 1934, in his short time as director, Raudsepp has restructured the institution to rely on a cohesive curatorial vision and introduce a stronger international programme and education department.  Since starting at the Art Hall, Raudsepp has dedicated a gallery as a space for educational programmes, hired a curator, and has generally moved the institution away from the conception of it as an ‘event space’.

While Raudsepp’s changes to the institution have been welcome in the community, another of Tallinn’s institutions has faced dramatic opposition as its young director has fought to move it into a new and positive direction.  Since 1999, The Occupation Museum has existed to tell the story of the Soviet occupation in Estonia. The museum is currently focused on its expansion programme which will double its square footage, and will also include changing the name of the institution to the ‘Freedom Museum’.  While it seems like a simple decision, it’s not uncontroversial: the change will refocus the institution entirely and shift the narrative from one that focuses around the Soviet past to one that stresses Estonian independence and freedom.
The post-Soviet shift is directed at the Estonian youth who, in their late-20s and early-30s, are the last generation to remember the Soviet occupation, and who are trying to forge a new path coupling international openness with Estonian identity. This translates to an art world that is looking for international references, conversation and exhibition, and thanks to initiatives such as the ECADC, these international conversations are happening more fully and more often.

Leslie Moody Castro is an independent curator and critic who lives in Mexico City and Austin, Texas. 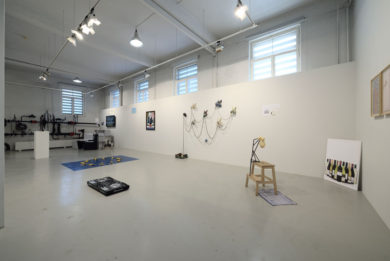