This past Saturday night, while throngs of hungry tourists descended on Expo Milano for the six-month food fair’s penultimate weekend, a quieter dinner party was happening nearby. Seated at the head of a long table inside the Fabbrica del Vapore, an art complex in a converted Milanese train factory, the Estonian curator Karin Laansoo sipped an elixir brewed from balsam herb. “We have six months of winter in Estonia, so we have to get that vitamin C somehow,” she told her well-heeled guests, all women. “That’s why we’re always eating plants” — and right on cue, the artist collective Dilettantin Produktionsbüro served the evening’s first course, a mound of fresh cheese topped with pickled Estonian radishes and turnips, presented on maple leaf.

It was an appropriately flora-forward introduction to the inaugural edition of “Eating the Forest,” a traveling art-and-food soirée that New York-based Laansoo organized to celebrate Estonia, and hopes to bring there soon. The meal showcased a cuisine best described as New Nordic, with a variety of accoutrements commissioned for the occasion. (The artists responsible for them were among the diners.) The German textile designer Julia Heuer, wearing a kimono and visiting from Switzerland, adjusted the synthetic fleece tablecloth, which she had printed with frizzled bunches of moss and cracked birch bark; the sculptor Adeline de Monseignat, in town from London, explained that her crystalline glass bowls were inspired by Estonian lakes. The Estonian artist Kris Lemsalu, meanwhile, who had cast the porcelain cups and plates from her own tube socks and underwear, joined the affair from her Tokyo residence studio via Skype video, projected on the wall. Although it was 2 a.m. in Japan, she was made up like a Sailor Moon doll, and she grooved to Japanese pop while waiters circulated spruce cocktails. “Bit unfair that you can see me and I can’t see you,” she typed, swigging from an Asahi. “It’s like Chatroulette.”

The meal’s ingredients, of course, had been scavenged in Estonia, and each of the seven courses was accompanied by a related beverage — cowslip tea; green-tea kombucha; estragon soda. There were no utensils, save for one particularly messy entrée, so diners were invited to serve themselves, and each other, with their hands. “We use tastes to seduce our audience and encourage interaction, but I don’t mean in a sexual way,” one of the chefs said, proffering wooden boards piled with brined onion, steamed mackerel and cabbage. Reaching for a handful of fish, Heuer asked if the wood came from Estonian trees, though she already knew the answer.

Moose meat with sea buckthorn and chervil tubers came next; then cod, lichen and pumpernickel, paired with Estonian beer. When a gluten-free guest requested a modified sardine crostini, she was given a stunning composition on a large green leaf. “Can I eat the leaf?” she wondered aloud. Laansoo laughed: “I’d leave it.”

After a brief intermission, an umami-rich consommé of moss, marjoram and fermented mushroom arrived in De Monseignat’s transparent bowls, which rocked precariously on the table. “I like to play with my objects being seductive and disconcerting at once, so the bowls have no base and seem like they might tip over,” she said, setting hers down gently. “They’re fragile, like life.” 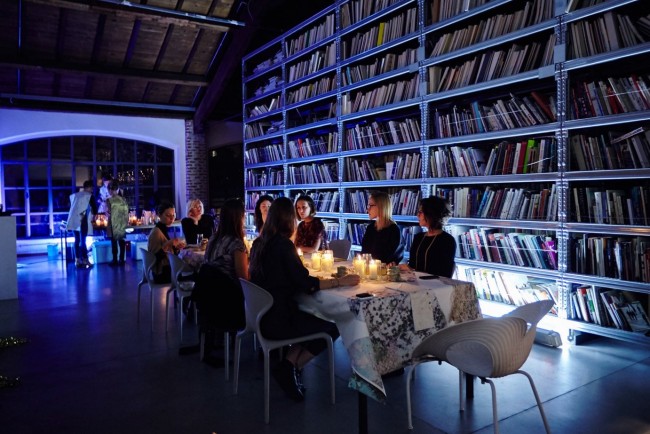